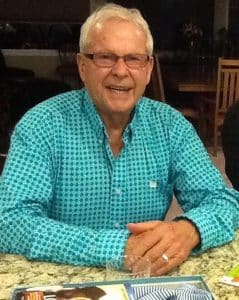 Larry Boyer was born on August 8th, 1935, at the neighbor’s house on Tom Beall Road. Larry joined four brothers, Bob, Bud, Jack, and Jim, and later two more siblings came along, Carla and William. Larry lived on Tom Beall most of his school-age years, except for about a year when their house burned down, and the family moved to the back of the Lisher's Hardware store in Lapwai until they fixed up an old shed on the Tom Beall property where he lived until he got married. Larry started to work when he was 6 for a local Chinese produce farmer at Spaulding, Lee Coons. They grew produce to deliver to local restaurants in Lewiston. He went to work for Meacham Land & Cattle during the summers.

Larry met and married June Whipple in September of 1952 when he was 17 and she was 16. Larry got a job at PFI that fall so they moved to Clarkston and their son Steve was born in December. When the sun came out in March, Larry couldn't stand working at the mill. He went back to farming for Meacham's. They moved into a farmhouse on Garden Gulch Road near Lapwai. In 1958 Larry and June bought their first house, about 35 acres of farmland and some pasture. Daughters Renee, Kelli, and Lori were added to their family in the coming years.

Larry and June worked as a team raising a few cows and pigs while working for Meacham's and hauling pea silage before and after work. In 1961, Larry started delivering pea silage full time to dairies around the valley. He began his custom harvesting for others and rented some more farmland of his own. Times were tough. Larry got a job logging and worked as a laborer for Neal Builders, all while still farming and raising cattle on the side. They then added another daughter to the family when Casey was born.

In 1968 he teamed up with Roy Maynard leasing his farmland and helping with his cattle while continuing the custom harvesting in the summer. By 1970 Larry and June farmed about 800 acres and added daughter number five when Jolee was born. In 1972 Larry and June were able to lease a large farm and would now be full-time farmers. They then purchased a grocery store in Lapwai in 1977.  June ran the store for two years while Larry continued to operate the farm as they raised six kids. In 1983, Larry and June built a new grocery store, restaurant, and gas station in Lapwai, which they helped run and manage. They were always very involved in the Lapwai community, school, and all their children's and grandchildren's activities.

In the mid 80's Larry and June got much more involved in rodeo when their daughter Kelli married the owner of the four-time World Champion Bulldogging horse, Catfish. For many years many of the contestants of the Lewiston Roundup would come and stay with Larry and June during the weeks of the Big 4 rodeos in the area. Larry and June continued to attend every Lewiston Roundup and traveled to Oklahoma and Las Vegas each year for the National Finals.

June passed away in 2014. Larry then moved to Lewiston but has continued to expand his farm and cattle operations with the help of many of his kids and grandkids who work for him. Larry has six children, five daughters, and one son. He has 12 Grandchildren and 24 Great Grandchildren!  These days Larry continues to be involved in the operation. Larry is 86 years old and still comes to the farm at 6:30 a.m. to bring the donuts and help get the crew started with their day. Larry and his companion Debra Allen enjoy going to the grand kids’ ball games, watching the Zags and traveling south when they can.