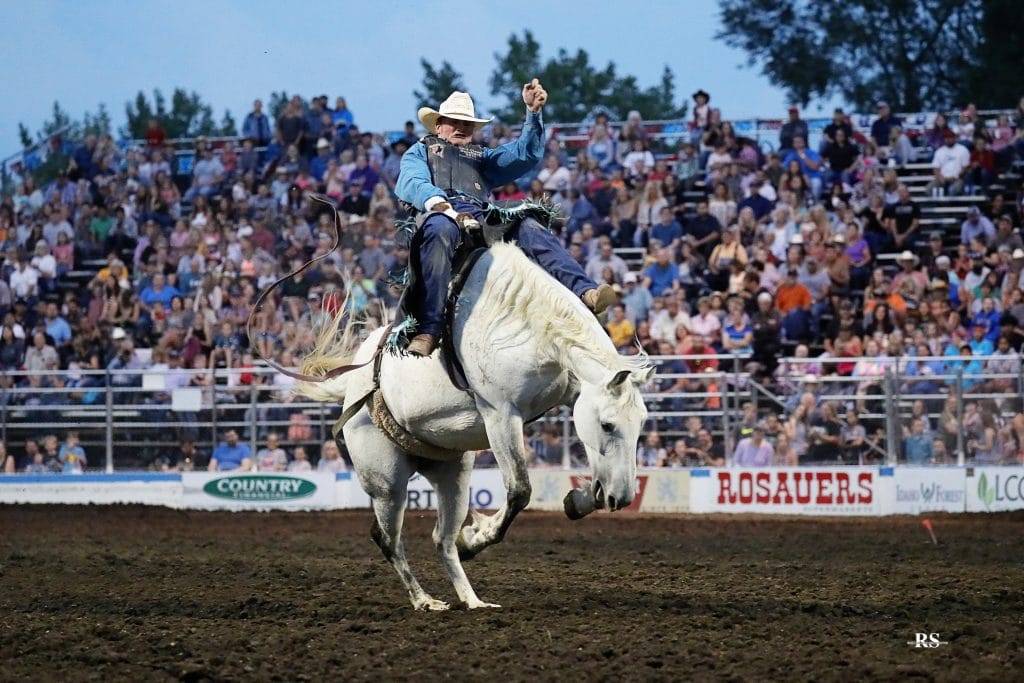 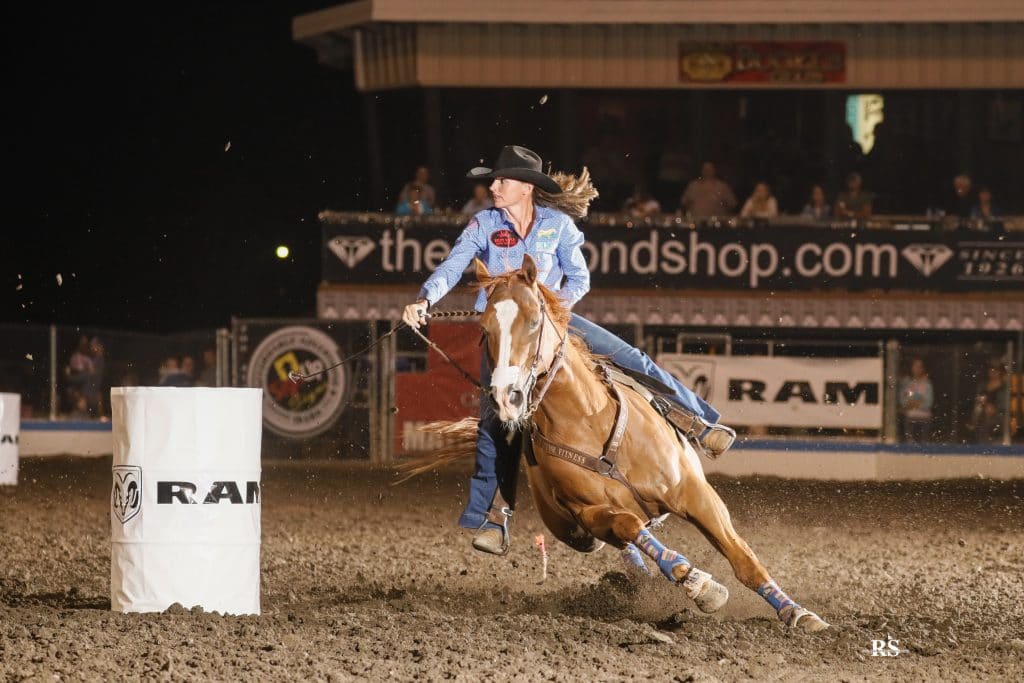 There are not too many situations where a rodeo event is described as “elegant.” Barrel racing is the exception to this situation. The contestant can choose to go to the left barrel or right, whichever. A 360 turn is required around the barrel to the next barrel opposite it, then around that final turn. Then the race is on to the finish line. Barrel racers lose points if they knock over a barrel. 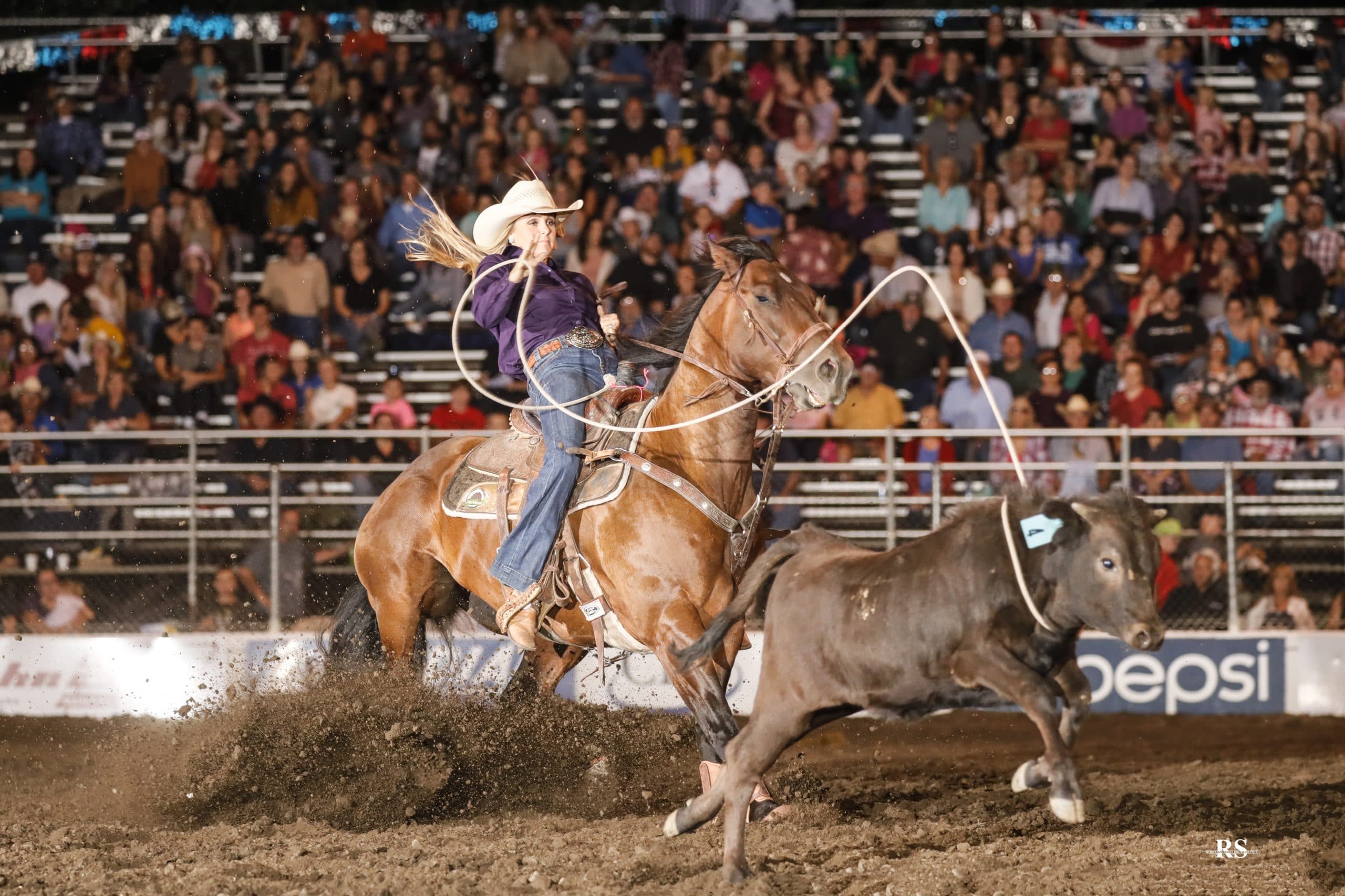 Breakaway Roping is a variation of calf roping where a calf is roped, but not thrown and tied. It is a rodeo event that features a calf and one mounted rider. The horse and rider wait in a box next to the chute that has a spring-loaded rope, known as the barrier, stretched in front.  Once the barrier has released, the horse runs out of the box while the roper attempts to throw a rope around the neck of the calf. 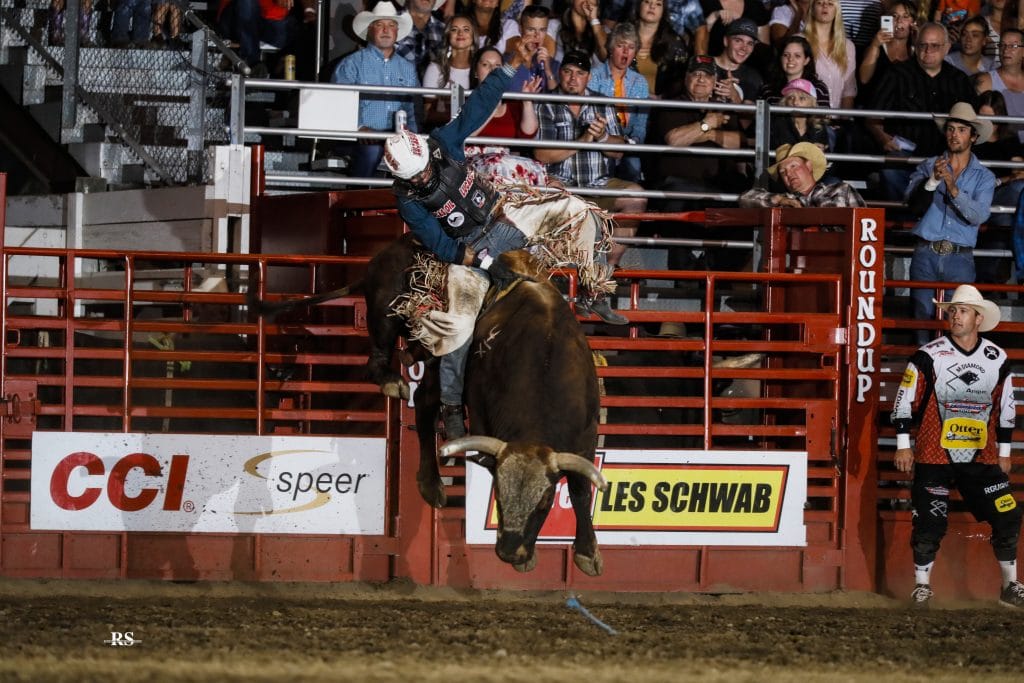 Bull riding is perhaps the most exciting event to watch. A cowboy tries to ride a bull for eight seconds while holding a bull rope looped around the bull’s midsection. Scoring is based on a possible perfect score of 100 points, with half deriving from the contestant’s efforts and half the bull’s.  Sounds simple enough but it’s not. Bullriding is one of rodeo’s most unpredictable events. 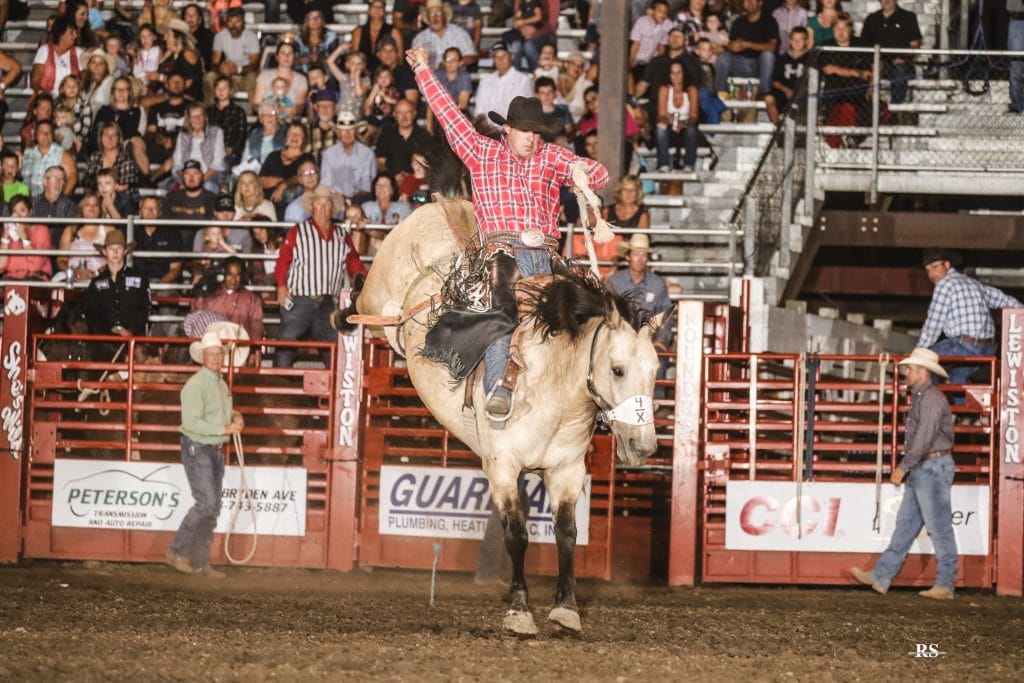 Rodeo’s classic event – saddle bronc riding — was truly born in the Old West, where ranch cowboys would test themselves against one another and unbroke n horses. Judges score the horse’s bucking action and the cowboy’s control of the horse combined with his spurring action. While the horse’s bucking ability is built into the scoring, a controlled ride tends to score higher. 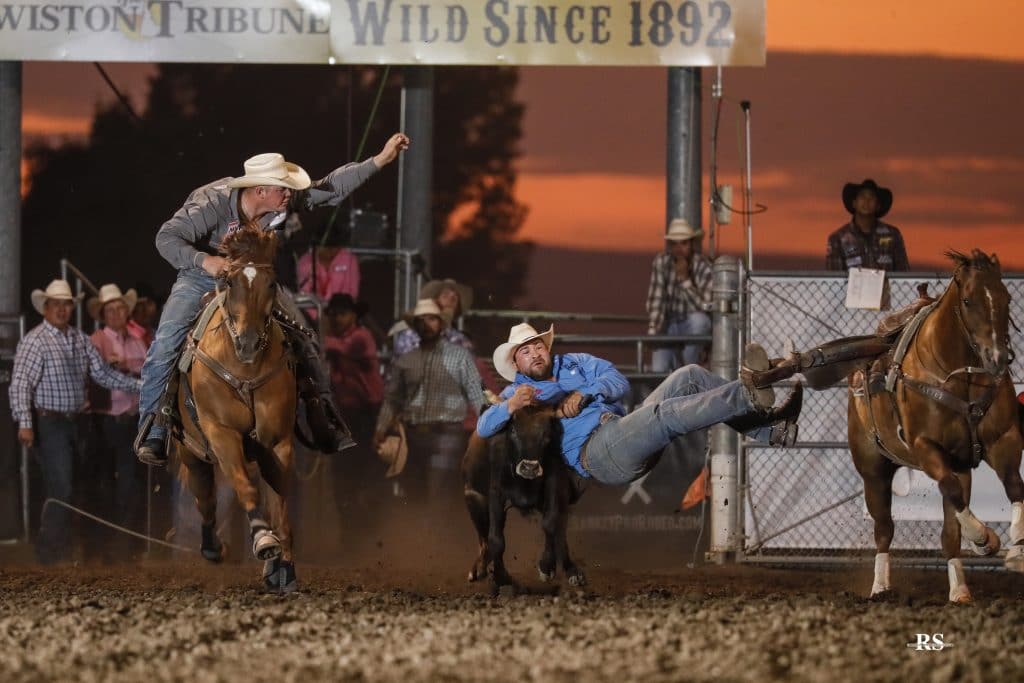 The concept seems straight forward enough: Jump from a horse, grab a steer by the horns and wrestle it to the ground, stopping the clock as quickly as possible. Easily said, not easily done. Timing, technique, strength and the horsemanship of the hazer, who guides the steer in a straight path for the cowboy, are the primary factors of this popular, historic rodeo event. 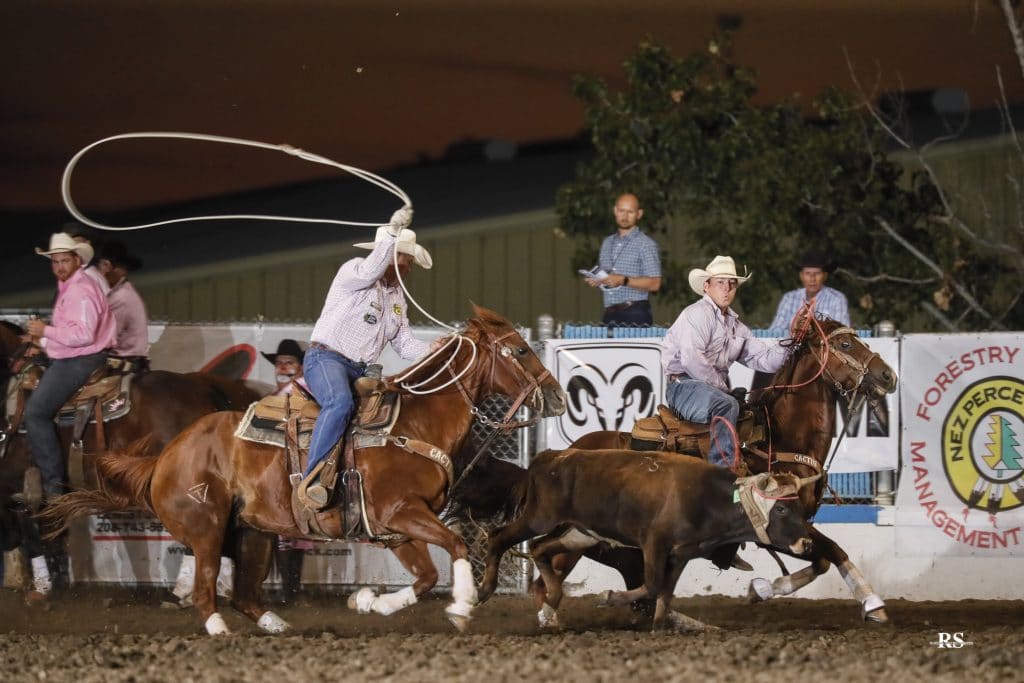 Team roping is team work in action. Success takes two teammates anticipating each other’s moves and the antics of a steer on the run. It’s rodeo art in motion. One cowboy works as the header, roping the steer around the horns, neck or a horn-neck combination. Then he turns the steer to the left so that the he can ride in and rope both of the steer’s hind legs. A roper is allowed 3 loops. 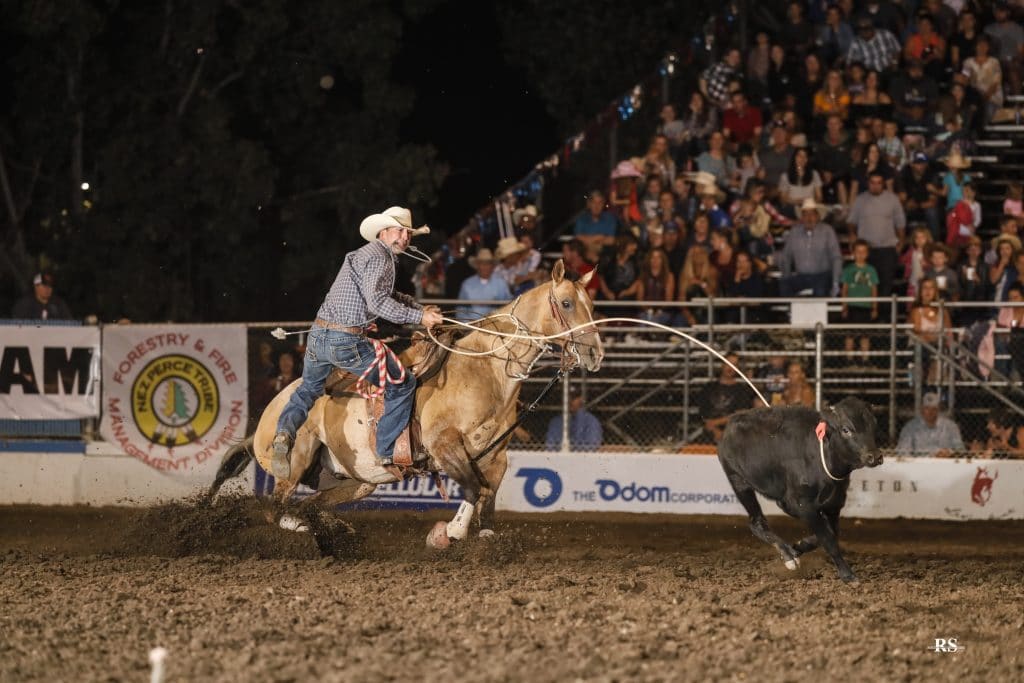 A tie-down roping run begins with a mounted cowboy giving a head start to a calf of about 250 pounds, then giving chase down the arena. After roping the calf, the cowboy dismounts, runs down the rope (which is anchored to the saddle horn), lays the calf on its side and ties any three of its legs together with a “piggin’ string” he carries clenched in his teeth and looped through his belt