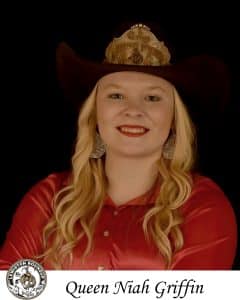 The 2021-22 Lewiston Roundup Queen is Niah Griffin. The 19 year old daughter of  Ryan and Brandi Griffin. Niah went to High School in Troy Idaho, is certified in Phlebotomy and is now attending University of Idaho in Agriculture Business major and Vocal Performance minor.  She would like to pursue her career in large animal veterinary medicine at Washington State University. Currently she is working at Palouse Animal Wellness & Surgery Center.

Her experience with  Horses started when she was 8 years old. 4H, FFA, Pony Club and still to this day shows and drives draft horses around the US and Canada.  She is a Horse 4-H leader for the Moscow Mustangs and gives riding lessons.

From a very young age, She would look forward to attending the Lewiston Round Up. The excitement of watching the Royalty race into the arena left her on the edge of her seat. She was so amazed at the horsemanship and poise they possessed and was such an inspiration to her to become a better rider. In future years, She felt honored to sing the National Anthem in that same arena. She again had that same feeling of awe and inspiration in having a small part of an event so important to the history that is rodeo and the Round Up. If she were able to inspire our youth to uphold the traditions of horsemanship,  rodeo and the love of our country and rural America, as she was inspired so many years ago, would be so fulfilling for herself. It is her goal for even one person in the stands to follow their dreams because of her efforts in the arena and within the community. It will be an honor for her to represent the Lewiston Round Up as Queen for the Royalty Court for 2022.

Niah would like to thank her family for all the support and help that she is receiving throughout the year. To the Lewiston Roundup Board of Directors for making this all possible. 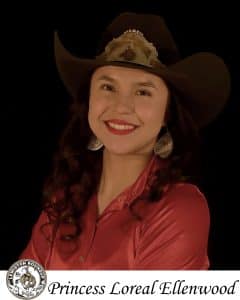 Loreal Ellenwood is honored to represent the Lewiston Roundup as a 2021-22 Princess. Loreal is the daughter of Quincy and Janice Ellenwood, she is currently 18 years old and is a Nez Perce Tribal member from Lapwai Idaho. She is a Lapwai high school 2021 graduate who is a four-sport letterman in volleyball, basketball, track and softball. She also did seven years of gymnastics and holds many 1st place awards in the events of bars, vault, floor and all around. Loreal was ranked nationally for bars with USA Gymnastics, the first gymnast to do that for 360 Gymnastics Gym in Clarkston WA. Being in gymnastics taught her discipline, dedication, strength and to never give up. This mindset overlapped into her equestrian journey. Loreals' true passion is riding horses. She has been riding since she was 3 years old.  She joined the Lewiston high school rodeo team where she participated in goat tying, breakaway, roping, poles and barrels. Loreal is a student at Lewis Clark State College where she plans to get an Associate's Degree and then transfer to a University to attain a Bachelor of Science degree to be a veterinarian, specializing in equestrian science.

As a young girl, Loreal would watch the Lewiston Roundup Royalty run into the arena and told herself that one day, she would be one of those girls. She knew that she needed to start working on her goal and she ran for the Chief Joseph Foundation Royalty and was chosen as Queen in 2019. She learned a great deal as Queen and took that responsibility very serious. She bought her first horse “George” from her Uncle Mike and began training him for barrels and breakaway. With no experience in horse training, she took the time to train with the help of Hahots Shebela, Karen Parvin, Tracy Hammond, Liz White, and Mike Ewing.

Loreal began to work towards her goal of competing in rodeo and becoming a Lewiston Roundup Royalty Member. Loreal is the first Nez Perce Tribal Member to be a Lewiston Roundup Princess in 88 years. She hopes to inspire other young women to follow their dreams and to know that if you work hard enough, your dreams will come true.

She would like to thank everyone who helped her along her journey to become a Lewiston Roundup Princess. She is thrilled to represent the Lewiston Roundup with Queen Niah and Princess Alli.

Loreal wants to thank all the Board of Directors for making this year possible and to Royalty Director Jamie for overseeing the Royalty program.